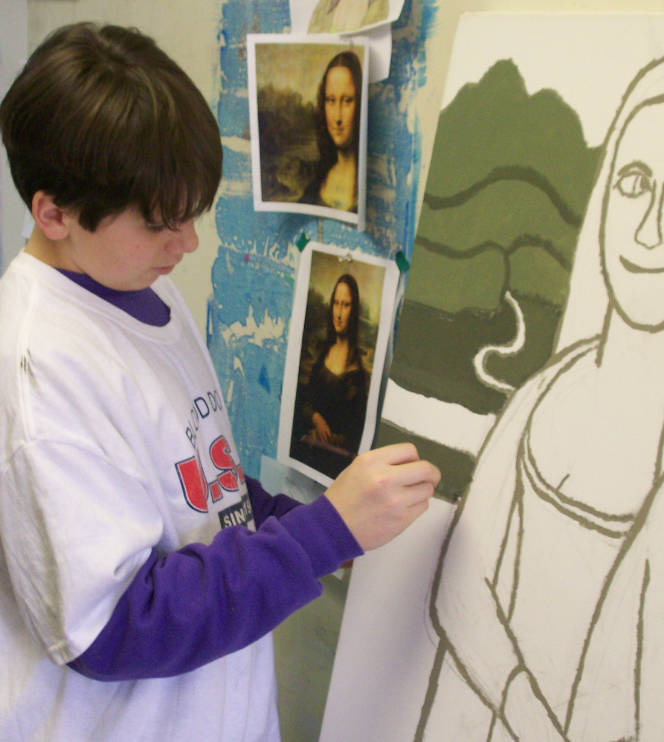 Nate Gier has been making art at Living Resources for more than half of his life. Always fascinated by portraits, at the age of 12, Nate created a 2×3 foot rendition of Leonardo da Vinci’s masterpiece “Mona Lisa.” When asked what attracted him to the “Mona Lisa” at that young age, he said, “I liked her smile.” And he still does. With the encouragement of Sergio Camacho, Assistant Director of the Art Program, Nate re-created her twice, each time starting with a bare canvas, applying his ever growing skills into newer, more detailed renditions, most recently in his preferred medium of colored pencils.

When the in-person art classes were discontinued due to COVID- 19 safety precautions, Nate greatly missed them. He was sad to be away from the classrooms, his amazing instructors, and all his fellow students. He also missed the routine that the classes afforded him. Not allowing barriers to inhibit his creativity, Nate actively participated in the online classes presented by the art department. He was very proud of himself, taking pictures of his work and posting it on social media.

Art has been very therapeutic for Nate. The sadness he experienced during the pandemic shut down led him to decide to create Disney themed Sketchbook. It was a way for Nate to remember the good times and positive feelings he experienced this past fall during his very first trip to Walt Disney World in Florida. He is determined to draw all the characters to fill up his sketchbook. To date, Nate has over 20 characters in his notebook. His mother, Kate said, “He is having a blast with that.”

In addition to taking art class, Nate holds down two part- time jobs. An essential worker, he cleans at Corpus Christi church twice a week and works at Precision Valve and Automation (PVA) three times a week. He has become acclimated to the preventive measures necessary for working at these locations such as wearing his mask, social distancing, cleaning his hands, etc.

When Nate found out that in- person art classes were re-opening, he began jumping up and down, saying, “I’m so happy!” Once back in class, he plans to continue interpreting Disney characters to complete his sketchbook. He hopes that, with the guidance of his instructors and a lot of practice, he will fulfill his dream to be a Disney Animator.

It was Walt Disney who said, “If you can dream it, you can do it,” so Nate is half way there!